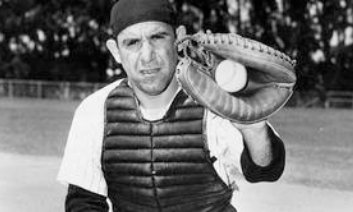 Yogi Berra was widely known for his famous quotes, dubbed by fans as Yogi-isms. As far as I know, the sports icon was not an expert in personal finance or investing. But judging from some of his quips, he could have been.

“It’s deja vu all over again”. Any time the stock market dives and “experts” try to convince you we are facing a never-before-seen crisis which calls for you to sell everything now, just remember this. We have been here before. The market will eventually rebound. Keep calm.

“If you don’t know where you are going, you might wind up someplace else.” Do you have a financial plan? If not, how will you get to where you want to go?

“Better make it eight. I’m hungry.” (Yogi’s response to the waitress asking whether she should cut his pizza into six or eight slices). The next time someone recommends a lot of narrowly-focused investments instead of a smaller number of broadly-diversified funds, ask yourself why. Usually you can get all the diversification you need with a small number of broad funds — which typically cost a lot less than the narrow funds many advisers push.

“Baseball is 90% mental. The other half is physical.” Investing may be 90% mental — specifically, keeping your cool. At some stage we’ll have an even tougher period than the past quarter. No one knows when. But history provides one lesson. You will almost surely do better by ignoring the ups and downs. If you sell low, in a panic, you can easily miss the rebound.

If you remember these four truths, you can avoid being the subject of another Yogi-ism: “We made too many wrong mistakes”.