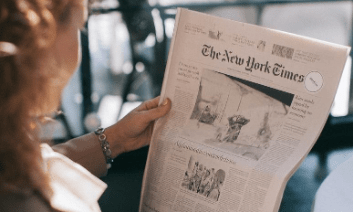 Today’s news is extremely unlikely to have any impact on today’s stock prices.

The explanation: the market has been anticipating this tax cut since Trump was elected. The only stocks that reacted to the news were individual stocks (housing, for example) where the news was different from expectation.

So … should we keep our ears to the ground for rumors and buy/sell based on those?

Three problems. First, how do we know what to believe and what to ignore? (That’s hard.) Second, can we buy before everyone has already bought? (That’s even harder.) Third, do we even know if the market will react, and how? (That’s harder still.)

The clear instances when the news will impact the market are when the news is completely unexpected. Think 9/11, or an out-of-the-blue earnings surprise. If you can divine those, you have an amazing skill. Move to Vegas.

The rest of us should ignore the news, at least for investing. We desperately want explanations for why the market goes up or down, and we want, even more, a leg up. But the market is smarter than most of us, because it represents the collective wisdom of millions of people. So, don’t try to out-guess it. Instead, hop on. The ride will be bumpy, and sometimes downright scary. But if you have a long-term view, history suggests you’ll be happy with the destination.